We understand the power of collaboration and so, from time to time, we invite guests to create insightful content to publish on INN8 Connect. Although the articles are thoroughly reviewed by INN8, the views, opinions, and positions expressed within these guest posts are those of the author alone and do not represent those of INN8 or any subsidiary or affiliate.

Not Your Grandfather’s Fed…

The US stock market capitalisation makes up nearly half of the world index. Understanding the actions of the US Federal Reserve (Fed), and how its policy stance impacts markets, is therefore critical for investors worldwide. [1] The STANLIB Multi-Strategy team pays close attention to Fed behaviour and we have observed a profound change post-pandemic.
7 min read

The Fed’s revised longer-term framework, announced in January 2021, has some key changes, such as:

“Fedwatchers” anticipating classic Fed behaviour from current chair Jerome Powell will continue to be surprised. The hurdle to reacting to inflation is now higher and the Fed is concerned about Main Street and not Wall Street. The conviction behind this new approach is strong, as the Fed does not want to repeat the past mistake of premature action like the 2013 taper tantrum or raising rates in 2018.

The implications, we believe, will be increased volatility across asset classes as the market tries to “learn” and adapt to a new policy approach.

For a balanced investor, the cocktail of “lower for longer” policy rates, coupled with the risk of higher inflation overshoots than in the past, is potentially higher bond yields (i.e. lower prices) due to rising term and inflation risk premiums. This is not a happy place for traditional 60/40 approaches that rely on a bond allocation to manage risk and provide a diversified source of return alongside equity.

Over the past decades, the Fed’s action has been predominantly focused on prices and inflation. This changed on 26 January 2021 when the Fed dusted off the longer-run goal framework (initially drafted in 2012) and made substantive changes. 2

Phrases such as the following were introduced, showing the Fed is clearly concerned about the low level of rates and reminding people of its dual mandate around employment and not just inflation:

“Owing in part to the proximity of interest rates to the effective lower bound, the Committee judges that downward risks to employment and inflation have increased. The Committee is prepared to use its full range of tools to achieve its maximum employment and price stability goals.”

The Fed watches inflation using the core Personal Consumption Expenditure (PCE) growth to determine when to change short-term rates. 3 In January 2012, Ben Bernanke (Fed chair at the time), made a previously implicit inflation target of 2%, explicit, so market participants were able to predict that the Fed would raise interest rates when the 2% line was crossed.

The watershed moment under Powell was switching from a threshold target to one assessed on average. Notably:

“In order to anchor longer-term inflation expectations at this level, the Committee seeks to achieve inflation that averages 2 percent over time, and therefore judges that, following periods when inflation has been running persistently below 2 percent, appropriate monetary policy will likely aim to achieve inflation moderately above 2 percent for some time.”

We believe this to be a market gamechanger. Markets will struggle to adjust to the more nebulous concept of an average inflation target, especially with a purposefully unclear time period for the average calculation. 4 The US economy is thus going to run hotter than in the past.

But how hot could it get before Fed action?

Amongst our many independent sources of research that we draw on in the Multi-Strategy team, MacroStrategy illustrates this well in the graph below (Figure 1) below. Their research shows that core inflation could be 4.1% for 3 years, “double the supposed target”, to reach a 2% average inflation over a fifteen-year cycle. 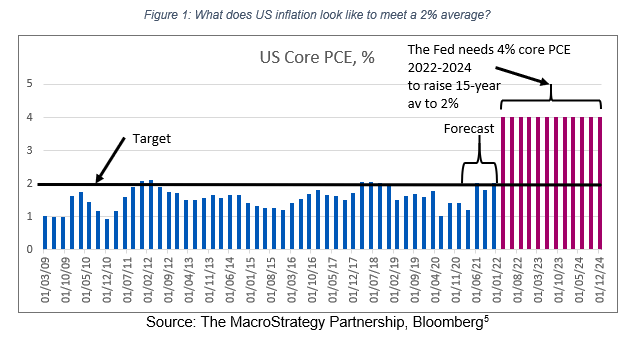 Return of the dual mandate

The significant impact on the labour market brought about by the global pandemic and economic lockdowns has placed employment and getting the US ‘back-to-work’ at centre stage. Janet Yellen, ex-Fed Chair and now the more leftist Democratic Party’s treasury secretary has voiced her support of pro-employment policies due to her past academic interest in labour market hysteresis (the persistence of economic events). Periods of low unemployment can create other persistent positive effects such as raising skills levels, bringing previously side-lined people into the labour force, and raising living standards.

Policymakers aim to avoid the reverse of stubbornly high unemployment creating persistent negative effects in a post COVID world. Despite the high stimulus and fiscal support in the US, unemployment has not returned to the low pre-pandemic levels although unemployment has fallen from the shutdown peak of 14.8% to 6.2% in March 2021. Powell said the actual unemployment rate is mis-estimated and could be “closer to 10%”. 6 With the current labour market distortions in play, policymakers remain concerned about these elevated unemployment levels.

The Fed has however, taken this one step further and introduced into the Fed goal framework:

“The maximum level of employment is a broad-based and inclusive goal”.

These are laudable ideals, but risk the Fed getting drawn into the political goals of the administration. Fiscal policy is undoubtedly a better tool to deal with this than monetary policy. Nevertheless, Powell has been very vocal on the need to tackle wider social imbalances. 7

Powell’s speeches have covered improving wage growth in the lower quartile of workers, tackling inequality by monitoring the higher levels of unemployment amongst minorities like Black African-Americans, and observing through labour participation rates how less educated (non-college) workers are kept within the workforce.

For example, the graph below (Figure 2) depicts tackling inequality in unemployment the levels of African-American and Hispanic unemployment are much higher than the 6% rate of total US employment. 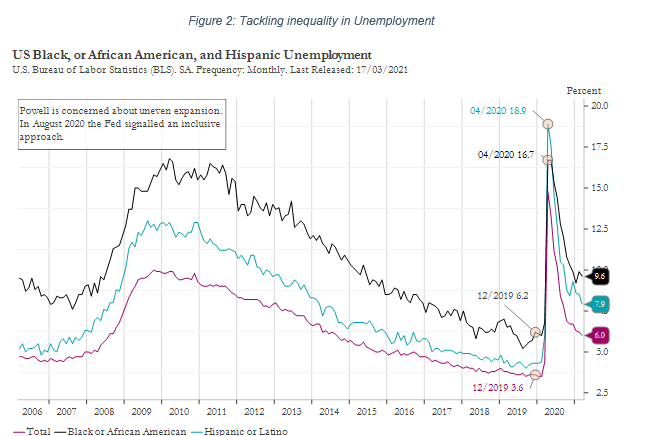 The Fed’s approach to steer the US economy has clearly become more complex. The policymaker shift of focus from Wall Street (investors and the markets) to Main Street (the man on the street) over the next decade is a theme that we signalled at the start of 2020 when we presented at STANLIB’s annual roadshow.

This as yet untested Fed reaction function comes at a difficult juncture for markets. Interest rates are close to their lowest level in many markets worldwide as governments are trying to kickstart fragile economies. Rates close to zero can limit policy responses. This is new territory for policy makers and investors.

Given the focus on unemployment and inclusivity, and under a more liberal Democratic US government, we expect the Fed to worry about unemployment first, and then inflation second. This has been echoed in speeches by Powell and Lael Brainard, but the market has not seen this for least ten years (perhaps never!).

Investors are also unclear about the Fed’s reference points. Must total unemployment return to the December 2019 level of, 3.6%, or is a higher rate more likely given the tremendous structural change created under COVID-19? How much must minority unemployment improve? In the past these rates have always been higher than the total unemployment rate. Is the Fed looking to just get back to the past differentials, or completely close the gap? Or target somewhere in-between? And when does inflation and not employment retake the focus? None of this is known.

Our Multi-Strategy premise is that increased US market volatility will be a consequence of the Fed’s policy and behaviour change.

We are moving into a period of higher inflation, even if this is primarily due to post-pandemic base effects. Foreseeably, inflation will drift higher than expected by the market before the Fed starts to react.

Inflation expectations have been anchored at 2% for many years. Many investors, over the last two decades, have never seen US inflation much above 2%, nor the uncomfortably-high levels seen in the 70’s and 80’s (Figure 3). High inflation can rapidly get out of control, so should investors be pricing in potential policy mistakes? 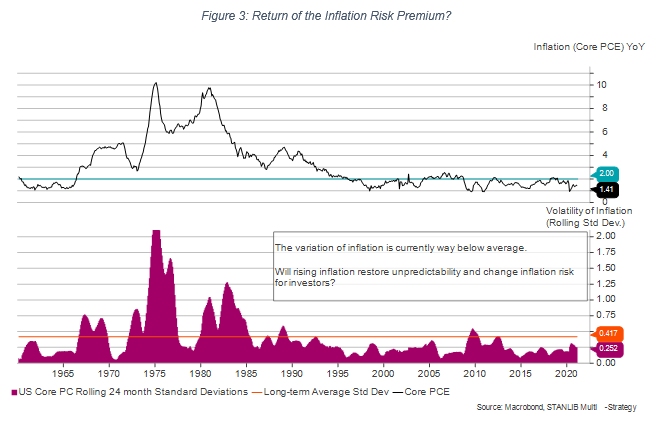 This is a great concern for bond investors, who are paid set nominal amounts in the future and are exposed to unanticipated inflation. Inflation risk premia have dwindled in bond markets particularly in recent history, when deflation has been the primary concern. 8 If we are moving into untested, yet higher, inflation waters, then it seems rational that bond rates must rise (and bond prices tumble) as a new inflation risk gets ‘priced’ into markets.

This continues to underline the weakness of a 60/40 ‘passive’ bond holding to control risk in a balanced portfolio. More comprehensive multi-strategy approaches, that can draw on other asset classes and strategies, aim to provide enhanced diversification and risk mitigation. The Fed’s new framework places all investors into new waters, and all we can be sure of is some rapids ahead.

1 The Federal Reserve is the US Central Bank governing the country’s monetary policy and interest rates.

4Jerome Powell explicitly said in his August 2020 Jackson Hole speech “In seeking to achieve inflation that averages 2 percent over time, we are not tying ourselves to a particular mathematical formula that defines the average.” (https://www.federalreserve.gov/newsevents/speech/powell20200827a.htm)

6 For example, this is due to the large drop in labour participation rates and parent’s having to do day care to help children with virtual schooling. See his 10 Feb 2021 speech to Economic Club of New York (https://www.federalreserve.gov/newsevents/speech/powell20210210a.htm)

7 Refer to Bloomberg news. For example, 7 March 2021, Powell’s dashboard how far US economy has to go on jobs

The first In the Room webinar for 2021 featured STANLIB’s senior portfolio manager, Warren Buhai. It was one for the books. Click here to watch.

RDR: What Does the Landscape Look Like Six Years Down the Line?

The Power of an Adviser Inspired Investment Platform