How Michael Summerton is Putting a Surfer's Soul Into Finance

While the financial industry has typically employed studious, serious, academic types who dress in suits and look and sound very smart, INN8 sees through that. Michael Summerton is one such example. 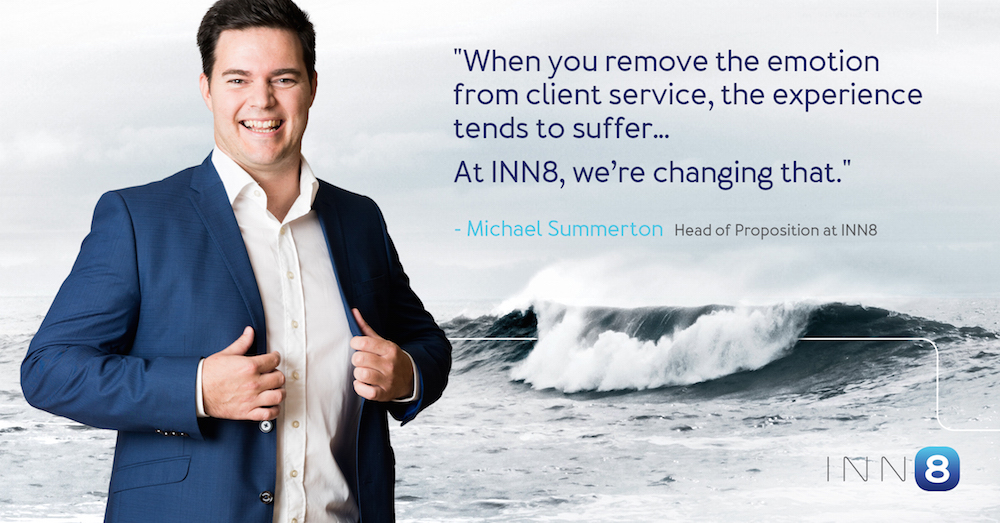 Money and savings is a serious business – and rightly so. Clients expect financial services companies and the people who represent them to be professional and trustworthy. These are their hard-earned savings, after all.

So when someone presents themselves in a smart suit and uses the right jargon, they probably know what they are talking about, right?

Well, while the financial industry has typically employed studious, serious, academic types who dress in suits and look and sound very smart, INN8 sees through that.

A South African wealth management proposition with a difference, INN8 ensures that the people chosen to join our tribe are insatiably curious, focused on delivering the future and live for awesome experiences.

Take, for example, our head of proposition, Michael Summerton.

For many people, the idea of a surfer handling their money just doesn’t cut it. Surfers are generally perceived as laid-back dreamers who speak of finding the perfect wave – and nothing else.

But upon meeting Michael, such perceptions change. As a surfer, his relationship with the ocean has helped him bring a surfer’s touch to finance.

“I have always loved the sea, but started surfing by accident,” he explains. “My dad took me down to an auction house in PE when I was 12 to show me what it was like. I spotted an old, dusty surfboard in the back and nagged him to bid on it for me. We picked it up for R120. And so, along with a few close friends who all started at the same time, we began a life-long yearning to ‘see what was around the next corner’.”

Since then, Michael has never ceased looking around the corner for the next surf spot and has ventured to places like Indonesia and Angola. “I have been fortunate that surfing has been a reason to travel and see new places, but not your traditional Insta-ready perspectives. I know what off the beaten track looks like and how the other 99% of the world lives.”

Now, Michael works to ensure that everyone on his team has the right perspective and curiosity to deliver on our adviser-inspired mantra.

“Unfortunately, when you remove the emotion from client service, the experience tends to suffer as no one is ‘putting themselves in the shoes of the client’. At INN8, we’re changing that,” says Michael.

One evening, after the Johannesburg launch of INN8, someone asked him how he felt. “When you discover a surf spot, you get to name it – and there is so much in a name. The rich history of the people and (sometimes random) events that culminated in that particular spot being discovered and subsequently named. It’s exhilarating to surf somewhere that might never have been surfed before and an honour to be able to name it.”

In the Room with Nedgroup Investments

Digital Tools To Grow Your Financial Advice Business | Part 4: Productivity
How to Choose a Discretionary Fund Manager in 4 Simple Steps
Please visit https://sacoronavirus.co.za/ to see the public information related to the national effort to combat the spread of Covid-19. Click Here.